Decades of human microbiome therapeutics research have shown that manipulating a person’s microbiome could be beneficial in treating a range of inflammatory, metabolic, and neurodegenerative disorders. Unfortunately, the development of microbiome treatments and drugs has not kept pace with the proliferation of studies. Interestingly, this sluggish progression has not slowed down investments flowing into R&D departments and startups that are looking to bring microbiome-based products to market. Harnessing the power of microbiomes for therapeutic applications has captured the attention of venture capitalists and established pharmaceutical companies alike.

The human body hosts a diverse community of symbiotic, commensal and pathogenic microorganisms, collectively known as the microbiota. These microorganisms are present both inside and outside the body, such as the skin, mouth, nose, hair, respiratory tract, GI tract, etc. Generally, the composition of our microbiome is relatively stable; however, external factors such as the environment, diet, aging, etc. can affect its composition and activity.

Technological advances in sequencing technology have shed some light on the pleiotropic effects of microorganisms on the human host. The pioneering work of early researchers using sequencing methods paved the way for the field of metagenomics, the study of genetic material recovered directly from environmental samples. Analysis of short hypervariable regions of microbial 16S rRNAs aided by next-generation sequencing (NGS) technologies enabled the characterization of the human microbiome. In 2007, the U.S. government embarked on the Human Microbiome Project—a $215 million effort that leveraged cutting-edge genome sequencing technologies to begin profiling the composition and function of the complex commensal communities dwelling within our bodies. Other initiatives followed focusing on identifying enterotypes and screening the biomes of diseased conditions. This foundational research led to the emergence of microbiome startups such as Seres and Vedanta Biosciences in 2010. 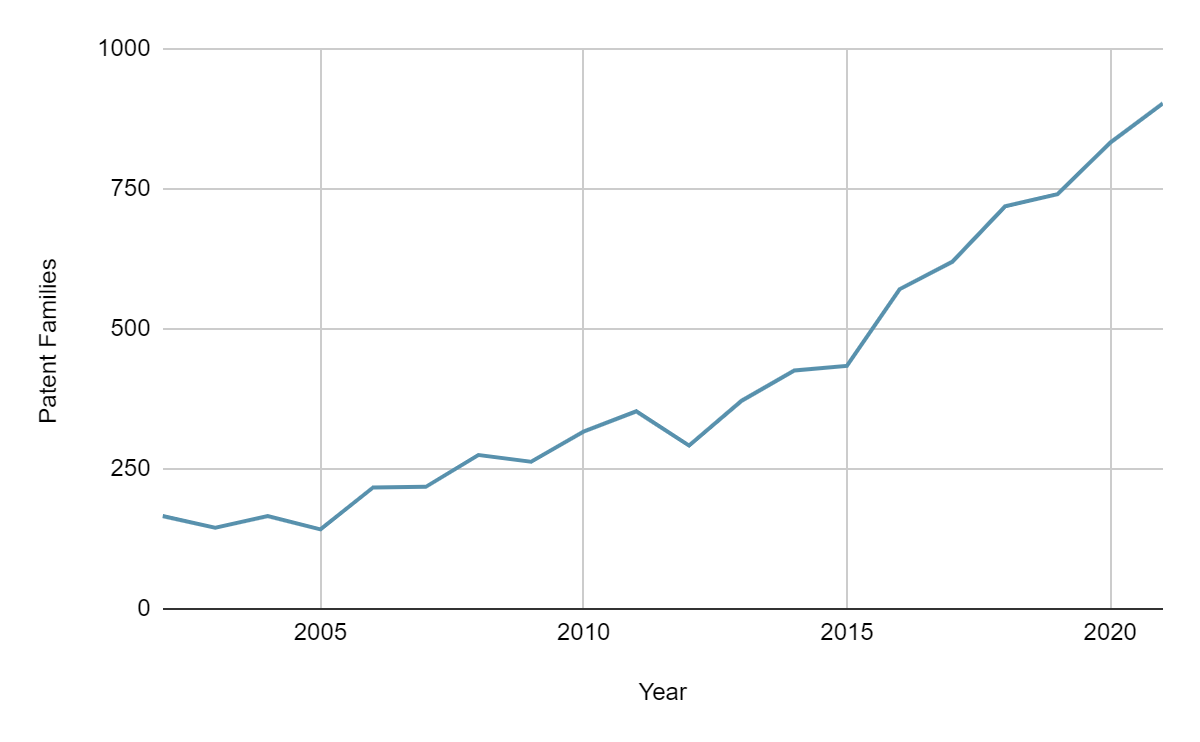 For deeper insights on innovative microbiome-based therapeutics we classified the inventions into the following categories: (1) fecal microbiota transplantation, (2) engineered probiotics, (3) modulatory therapies that employ prebiotics and postbiotics to change the composition or activity of the endogenous microbiome, (4) targeted antimicrobials which eliminate deleterious members in the microbiome and (5) medical devices. Although not discussed herein, MaxVal can also classify microbiome therapeutics in other ways, such as based on microbiome signaling pathways, covered indications/therapeutic areas, types of microorganism, types of molecules, and claim coverage (cells, vector, kit, device, manufacturing method, etc.). Please get in touch with us to obtain the full report including a detailed analysis of the microbiome therapeutic landscape.

The use of live biotherapeutic products is one of the best-characterized approaches to target the microbiome. Early success from fecal microbiota transplantation (FMT) for Clostridium Difficile infections (CDI) has fueled drug development in this area. CDI is characterized by the pathogen taking over the gut if the resident microbiome has been damaged due to antibiotic treatment which results in digestive distress and long-term health problems in patients. FMT-based therapies are derived from donor stool samples that are delivered to the recipient. In the last two decades, several research groups have shown that transplantation from healthy donors can rebuild the damaged gut and reduce the risk of infections. 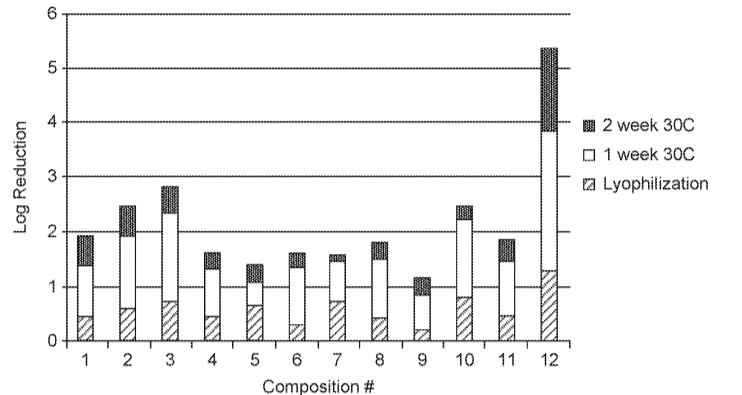 PCT Application WO2020118054A1 titled “Compositions for Stabilizing Bacteria and Uses thereof” assigned to Seres Therapeutics describes compositions, formulations and methods for stabilizing one or more bacteria (e.g., through freeze drying). The composition includes one or more different OTUs of viable bacteria, urea, and one or more excipients such as a cryoprotectant. A therapeutic formulation derived from the composition may be used to treat a subject with a microbiome-associated disease or disorder such as CDI. 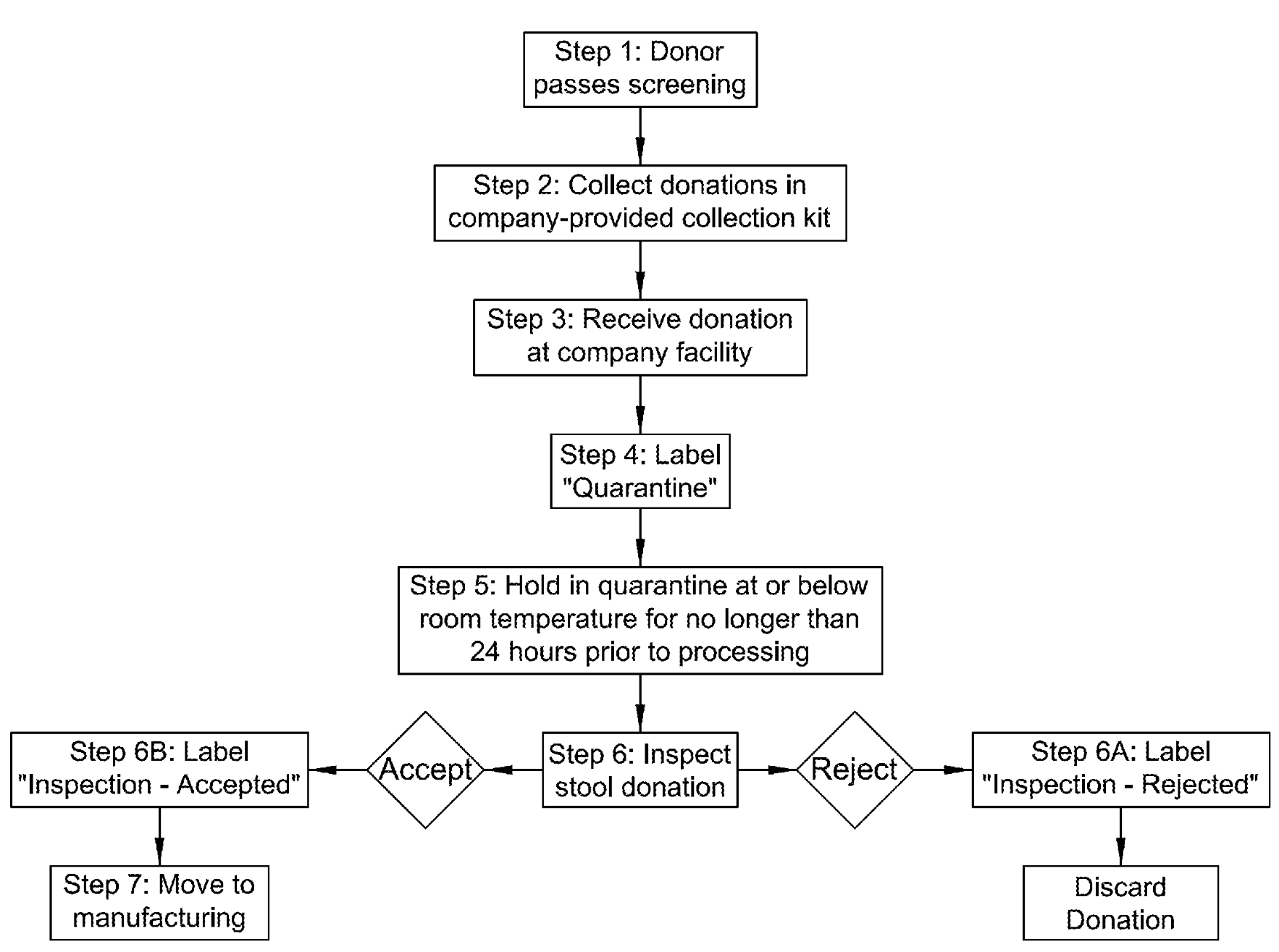 US patent application US20200230182A1 titled “Microbiota Restoration Therapy (MRT), Compositions and Methods of Manufacture” assigned to Rebiotix describes microbiota restoration therapy compositions and methods of manufacture thereof. In one example, a human fecal sample is collected and a diluent is added to it to form a diluted sample. The diluted sample is mixed, filtered and the filtrate is transferred to a sample bag and sealed. 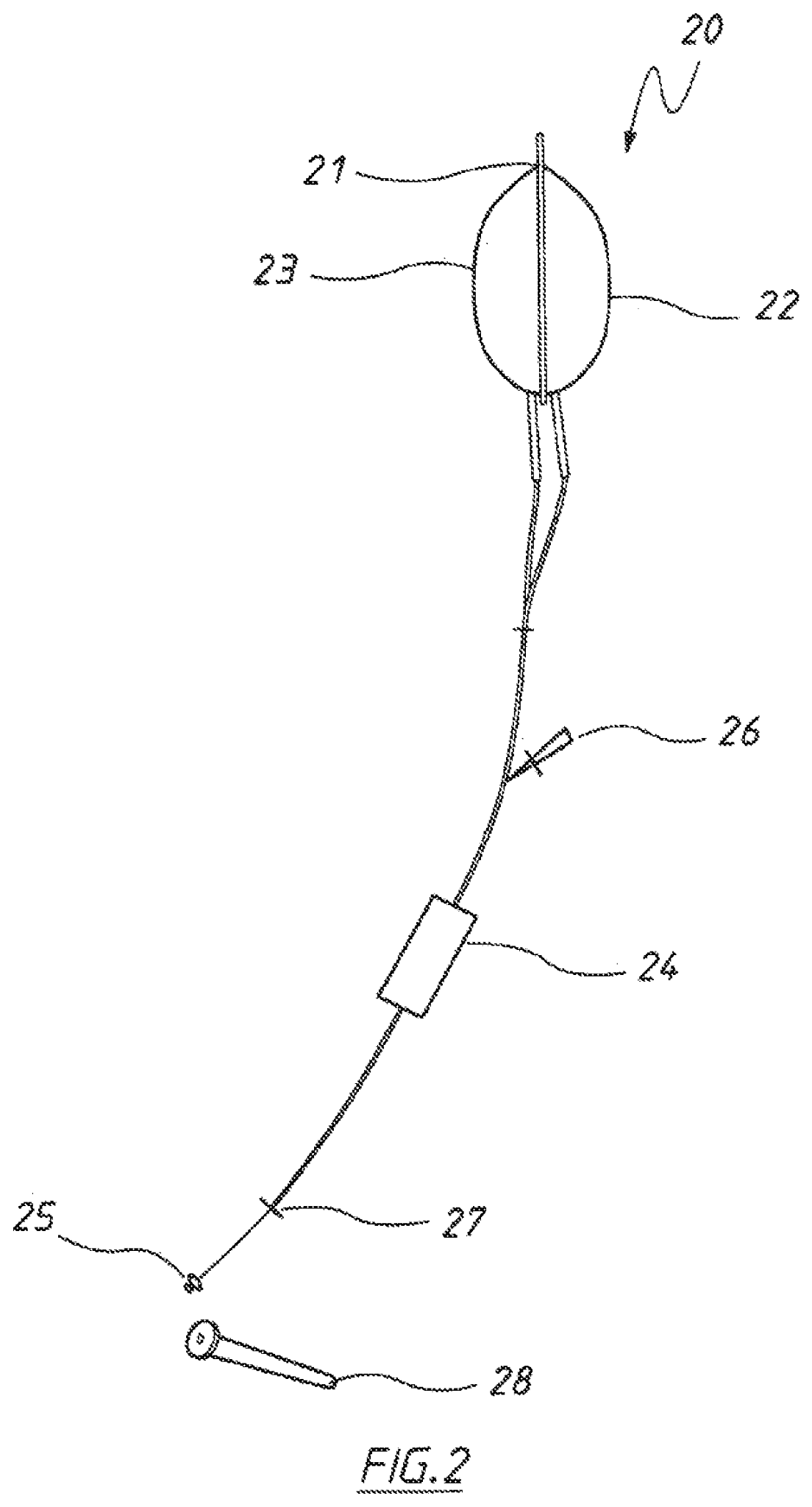 US Patent application US20200397834A1 titled “Compositions for Fecal Floral Transplantation and Methods for Making and Using Them and Devices for Delivering Them” assigned to Finch Therapeutics describes compositions and devices for delivering fecal material to a patient.

FMT requires screening protocols to ensure a pathogen and contaminant-free purification process. One way to avoid the regulatory hurdles associated with FMT is the use of live therapeutics made up of one or more selected and experimentally defined bacterial strains. The selection involves a comparison of the microbiota of the diseased patients against healthy individuals followed by computational analysis to identify and characterize the strain signatures. The strains are propagated in laboratories thereby obviating the donor requirement. The use of engineered single strain or consortia of cultured microorganisms is being tested for a wide variety of conditions such as inflammatory bowel disease, obesity and diabetes.

Vedanta Biosciences is one such company focusing on modulating the microbiome using engineered probiotic oral therapies based on rationally defined consortia of bacteria derived from the human microbiome. The company’s clinical-stage pipeline includes product candidates being evaluated for the treatment of high-risk C. difficile infection, inflammatory bowel diseases, advanced or metastatic cancers, and food allergies. 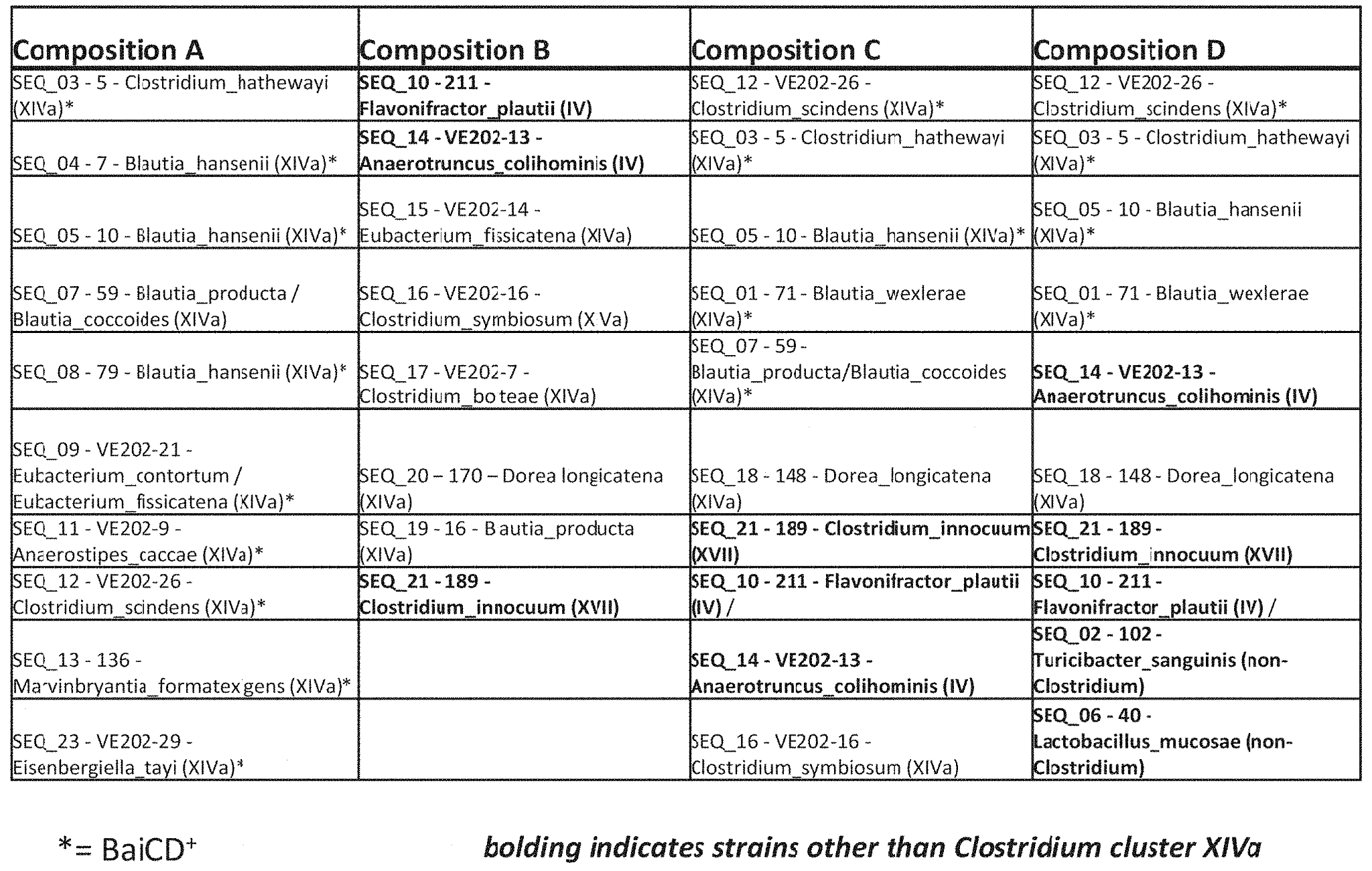 Small and large molecules are capable of regulating the microbiome. Prebiotics are compounds that induce the growth or activity of beneficial microorganisms, such as bacteria and fungi. Prebiotics may also be used along with probiotics – termed synbiotics – to induce the growth of beneficial microorganisms while also administering live microorganisms. Another approach is the isolation of metabolites, bioactive compounds, waste products (i.e. postbiotics). Postbiotics target downstream signaling pathways of the microbiome, such as immune activity and mitigate the negative effects of the microorganisms leading to dysbiosis. Several bacterial-derived bioactive molecules such as polysaccharides, structural proteins, and short-chain fatty acids are being studied currently for their role in altering microbiome pathways. 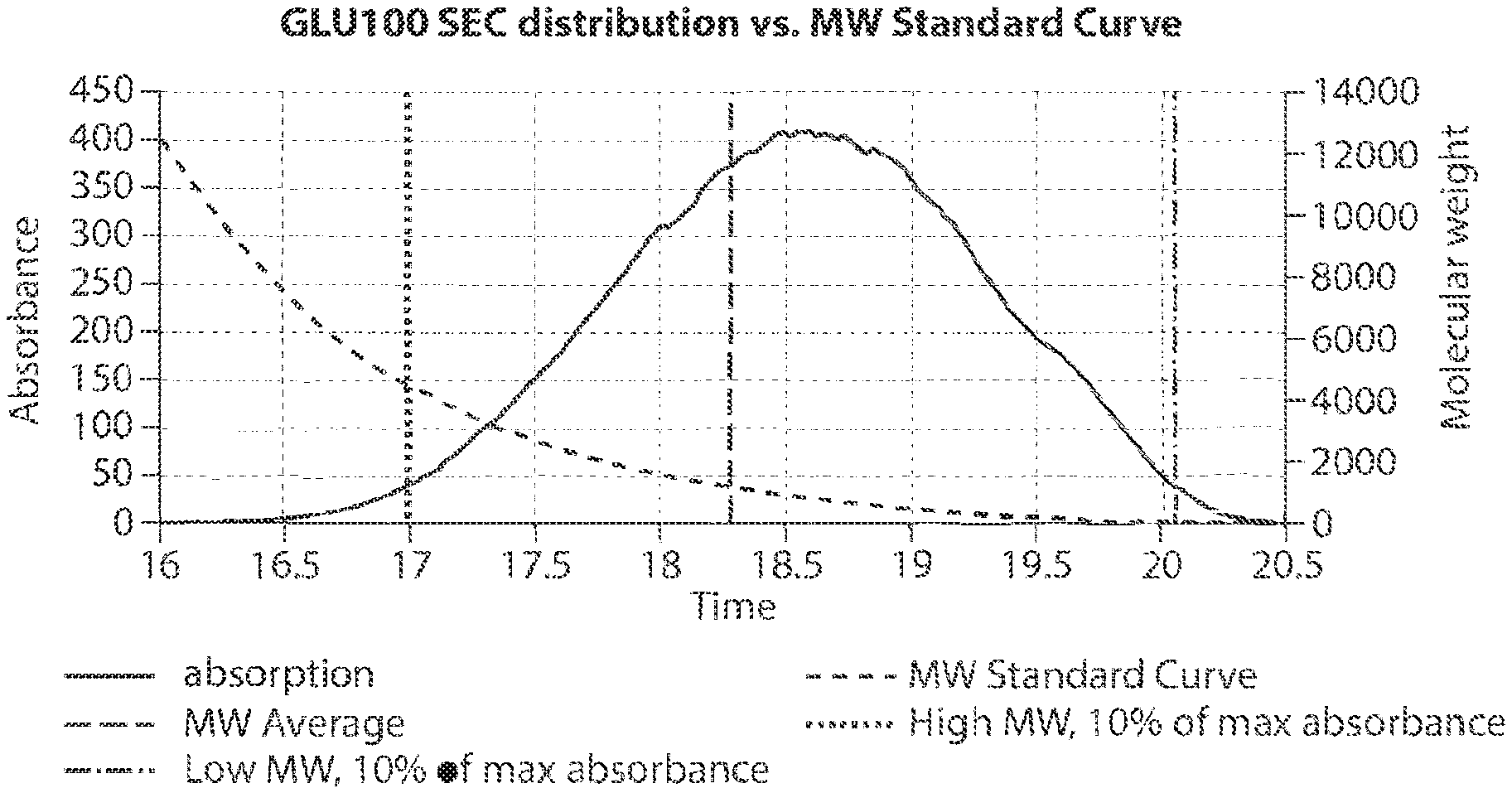 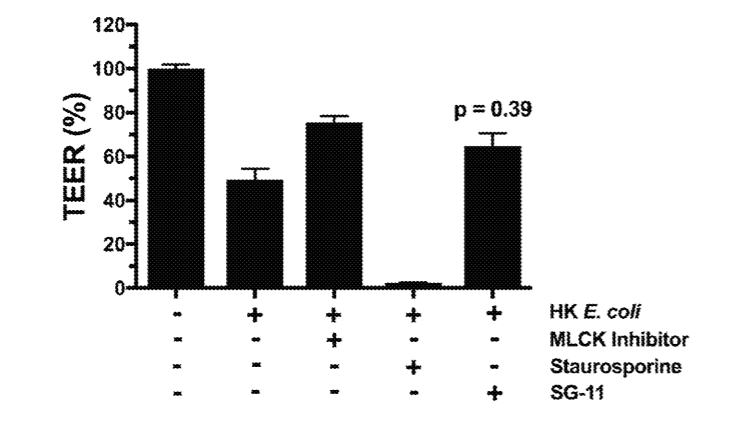 An entirely different approach to microbiome therapeutics is the use of targeted antimicrobial agents. Bacteriocins and bacteriophages are examples of targeted antimicrobials selective for the pathogenic/harmful microorganisms. In contrast, antibiotics are indiscriminate in their killing of pathogenic and beneficial bacteria. Bacteriocins are natural antimicrobial peptides that are ribosomally synthesized by bacteria and may help gain an edge over its competitors by exhibiting toxic activity selectively towards susceptible cells while protecting itself and progeny from the effects of bacteriocin. Bacteriophages, or phages, are viruses that infect bacteria thereby killing them. Engineered phages which carry additional modifications are attractive for modulating the microbiome. The antibiotic resistance crisis further adds to the appeal of bacteriocins and bacteriophages. 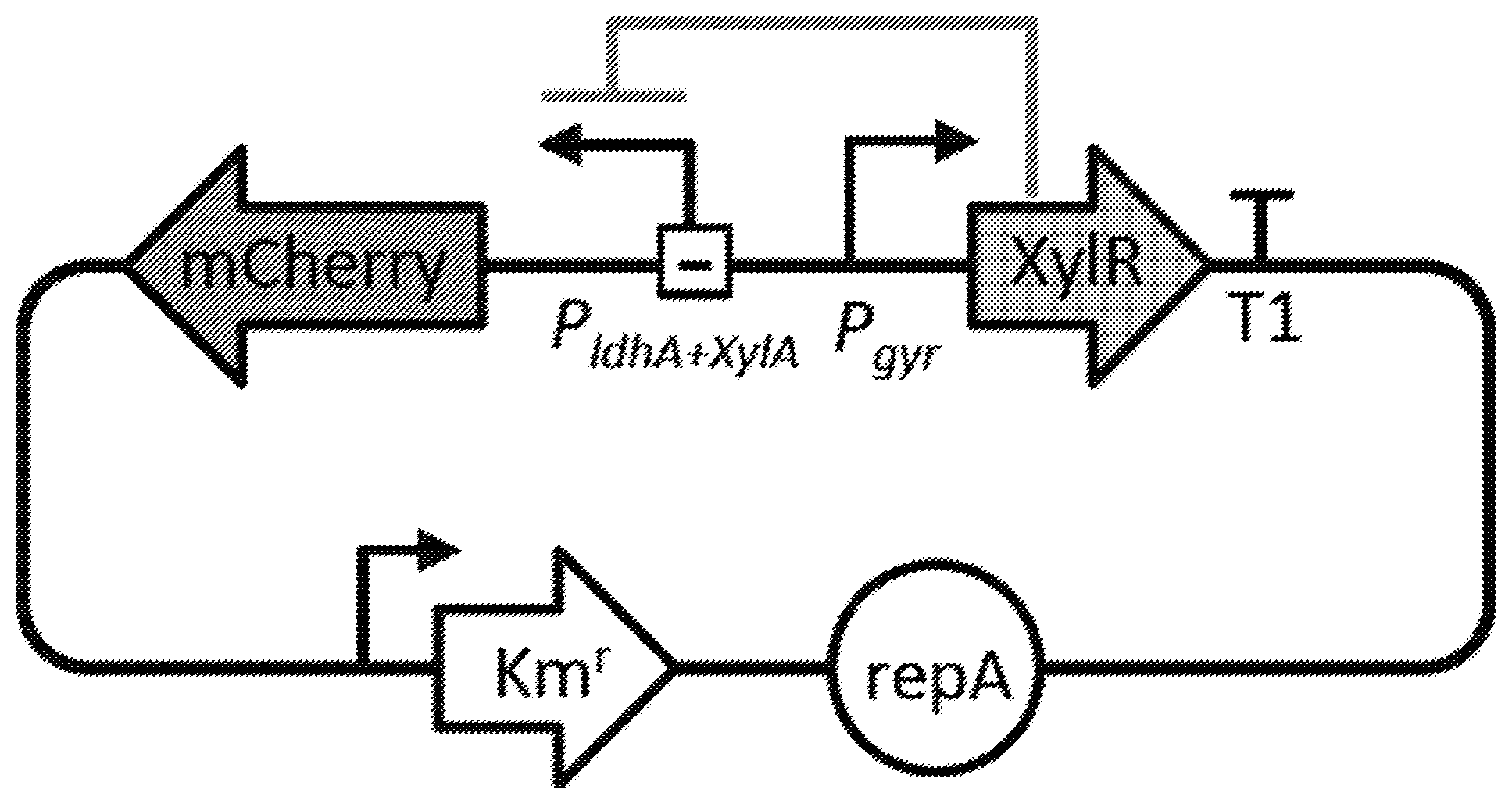 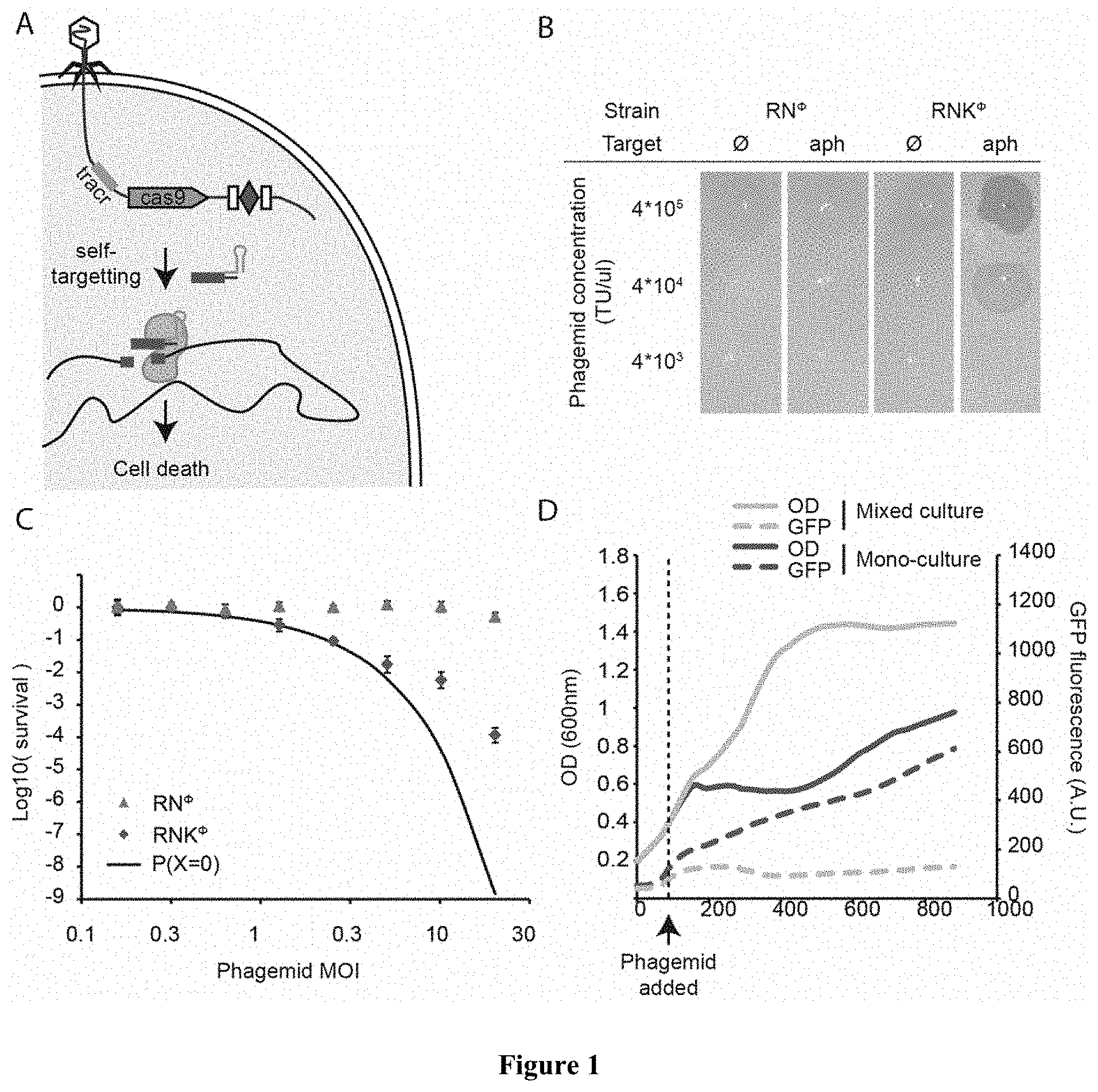 US patent application US20200282026A1 titled “Sequence Specific Antimicrobials”, assigned to Rockefeller University, describes compositions and methods for selectively reducing the amount of antibiotic-resistant and/or virulent bacteria in a mixed bacteria population, or for reducing any other type of unwanted bacteria in a mixed bacteria population by targeting bacteria that are differentiated from other members of the population by at least one unique clustered regularly interspaced short palindromic repeats (CRISPR) targeted DNA sequence in a recombinant phagemid.

Microbiome research is also fueling investments in diagnostics, instrumentation, platform technologies and medical devices. Devices for sample collection and delivery in FMT is one such area that is being tested currently. For instance, FMT can be delivered via upper or lower endoscopies, naso-enteric tubes, enemas, or capsules with fresh, frozen, or thawed preparations. 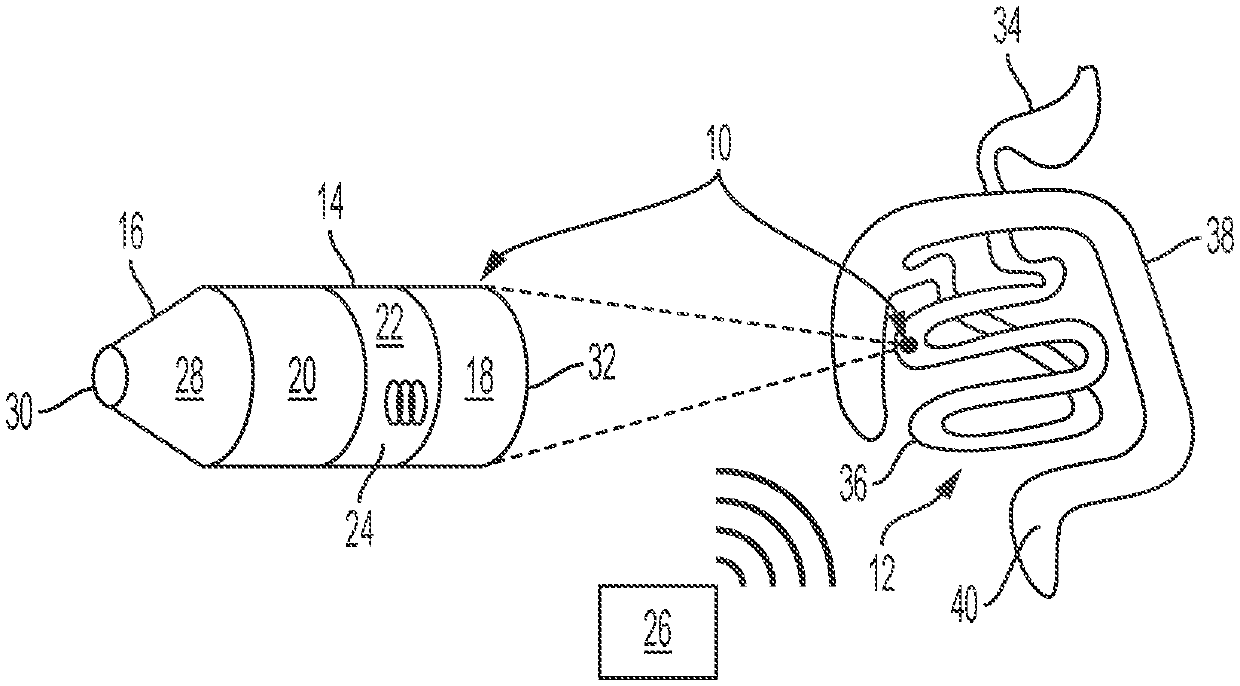 US patent application US20210000453A1 titled “Acquisition of Samples for Evaluating Bacterial Demographics” and assigned to Tufts University describes a gut rover that traverses the guy and collects samples of the microbiome in a way that permits correlation of samples with particular locations from which they were sampled. Among the sampler described is an osmotic sampler in which an osmotic pressure differential across a membrane drives sampling and collection of predefined volume halts sampling. 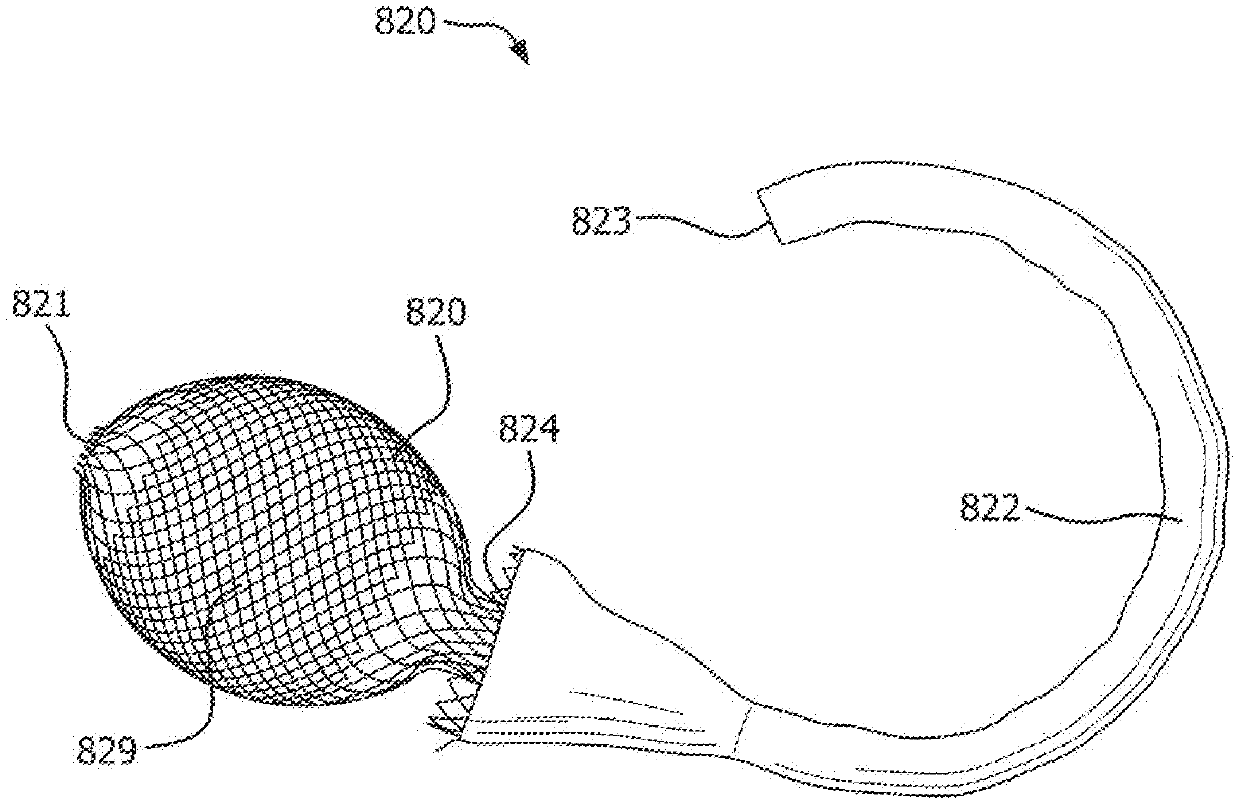 US patent application US20210015645A1 titled “Anchorless intragastric Device For Treating Obesity”, assigned to Synerz Medical, describes an intragastric device that contains a compressible free-floating structure and an anchorless sleeve attachment. The device is configurable between a compressed pre-deployment configuration and an expanded post-deployment configuration. The gastrointestinal device may be used to deliver prebiotic and/or probiotic therapy to a patient.

Advancements in microbiome therapeutics are still nascent due to existing hurdles in drug development. The top patent filers did not feature any of the pharmaceutical giants. Several drug candidates are on their way to FDA approval. COVID-19 may delay some of these ongoing trials due to the ongoing challenges of obtaining donor samples at scale, characterization, delivery and safety monitoring. Inspection of the startup funding scene revealed investments by pharmaceutical giants like AstraZeneca, Johnson & Johnson, Genentech, Gilead and Takeda1. We may continue to see an expansion of partnerships and R&D investments by pharmaceutical companies in the near future.

Recent efforts have focused on recombinant expression of therapeutic molecules in cell-based therapies for in-situ production of the biomolecules thereby overcoming pharmacological barriers and enabling on-demand drug release. The microbiome has also been suggested as a drug delivery system and for combination therapies in cancer and other diseases. Future microbiome therapeutics may focus on precision medicine by control or manipulation of one’s microbiome. For example, this may be through fingerprinting a patient’s microbiome and developing a personalized and targeted treatment approach – for example through the use of phage therapy. Although we have focused on human microbiome-based therapeutics, research focusing on personal care, animal health and agriculture may lead to widespread adoption of microbiome products in the future.

Contact us to request a copy of a landscape report on microbiome therapeutics. To know more about our search services, please click here.