Satellites can provide high-speed internet connectivity in places where there is limited connectivity or infrastructure challenges. In fact, companies like Hughes Network Systems and Viasat have been doing just that for a while now with the use of satellites in geostationary orbits (Source: Hughes, Viasat). However, one major drawback with getting your internet from geostationary satellites is “Latency”. Latency is the time it takes for a request from your computer to reach its destination and receive a response back to your computer. For the majority of the use cases like web browsing, video streaming, etc., latency may not be a major issue. However, for time-sensitive and real time applications such as video conferencing, competitive gaming, financial transactions, stock market-related applications, etc. low latency is of major importance.

In a new step towards addressing the latency problem, SpaceX says its satellite internet service has achieved a latency under 20 milliseconds, which is on par with present broadband services. SpaceX is even inviting the public to participate in beta testing of its high-speed, low latency internet delivered from over 500 functioning satellites. As many as 12,000 satellites are set to be launched into low earth orbits by SpaceX as part of its Starlink project. While this has drawn the ire of astronomers and raised concerns of additional space junk, the satellite network is understood to be essential for launching wider-scale internet service. So, what makes the SpaceX Starlink constellation any different?

SpaceX’s Starlink constellation is fundamentally different from the systems currently in place. It primarily uses a group of low earth orbit satellites instead of a single geostationary satellite to provide coverage over a geographic area. This coverage is illustrated below. To further simplify, imagine you are in New York and a website that you want to visit has its data stored in a server in Los Angeles, with the existing satellite-based internet, when you request to view a website, the request is sent to the satellite in geostationary orbit, forwarded from the satellite to the servers in Los Angeles. The servers in Los Angeles then transmit the response back to the satellite in geostationary orbit from where it is sent to your device in New York. Due to the height of the geostationary satellite (approximately 22,000 miles up), the request and response have to travel a very long distance, which results in high latency.

The mega constellation could have other applications such as an alternative to GPS navigation by providing unjammable connection and precision which is of interest to the US Army. SpaceX recently revealed that it has tested using lasers for inter-satellite communication (Source: link). While its laser may not be as powerful as the fictional Death Star’s, it does allow high-speed transfer of large quantities of data over large distances along with an extremely high bandwidth ceiling while further reducing latency.

Unlike geostationary satellites, low earth orbits satellites are constantly moving in their orbits with respect to the earth’s surface. The technical challenges to enable the Starlink constellation to provide a seamless internet service may be primarily related to tracking. These include the ability of each satellite to locate other satellites and automatically establish an optical link to form a mesh, the ability of the transceivers on the ground to track the relative position of satellites in range and automatically reorienting itself to establish a link with the satellites. How is SpaceX tackling these challenges? Can patent documents reveal any clues?

We can assume that Elon Musk was referring to a relatively low emphasis on patents (and perhaps dependence on trade secrets) for SpaceX’s rocket technologies when compared to the other established companies in the aerospace sector. A quick examination revealed that SpaceX was granted a patent as early as the 17th of March 2009 (US7503511B2). This narrative of essentially having no patents no longer holds true for SpaceX, since beginning 2016, SpaceX started filing patents related to its Starlink antennas. As of September 24, 2020, SpaceX has a total of 28 published patent applications (3 granted U.S. patents, 9 U.S. pending applications, 9 PCT publications and 7 Taiwanese applications). 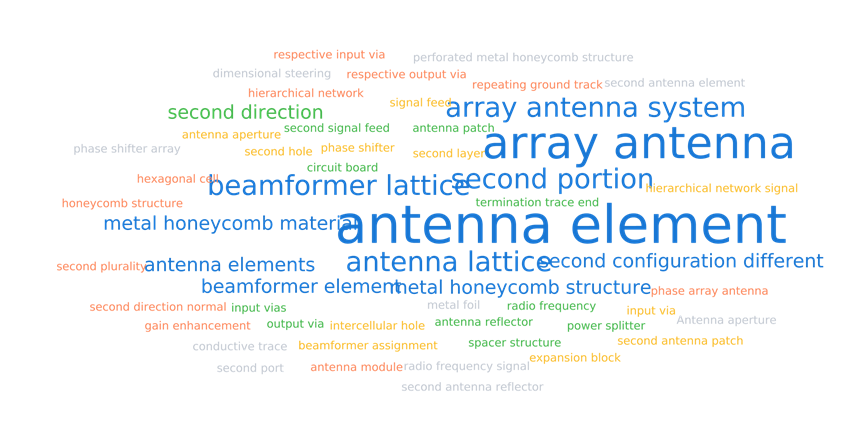 A quick search for patents related to antenna arrays in satellite based internet/communications reveals 12,473 patents and applications. We examined SpaceX patents related to satellite internet constellations to investigate whether it does include a recipe book for tackling the technical challenges.

US Patent No. 7,503,511 filed on August 4th, 2005 and titled “Pintle Injector Tip with Active Cooling” focuses on the pintle tip positioned near the combustion chamber of a bipropellant rocket. Conventional pintle injector tips often use ablative surfaces on the downstream face of the pintle injector tip to protect the downstream face from heat damage. The pintile injector design disclosed in this patent has first and second apertures with substantially different path lengths from the central passageway through the tip material. Conventional primary apertures are configured to have a short length through a relatively thin section of the tip wall, and the secondary apertures positioned nearest to the downstream face of the pintile injector are designed to have longer path lengths through a relatively thicker section of the tip wall. The extra length of the path serves to aid in the cooling of the pintle tip. This design also intentionally reduces the propellant mixing efficiency causing the hotter areas of combustion to be effectively moved somewhat downstream of the pintle tip face, thus reducing the need for an ablative layer on the pintle tip face.

US Patent No. 10,486,389 filed on October 5th, 2016 and titled “Laser-Perforated Metal Honeycomb Material and Method of Manufacturing Same” claims a method of manufacturing perforated metal honeycomb material. The metal honeycomb structure, due to its weight to strength ratio, is highly preferred for aerospace applications. The perforation in the honeycomb structure allows air trapped inside the cells of the honeycomb to move freely and escape during rapid changes in atmospheric pressure. The disclosed method uses a laser to generate perforations on a metal sheet, either before printing the roll of metal foil with lines of adhesive or after printing the lines of adhesive, then these are sheeted into a plurality of stacked sheets with the lines of adhesive superposed between each juxtaposed sheet and finally laminating the sheets into a honeycomb, before expansion.

US Patent Publication No. 20190253125 filed on February 14th, 2019 and titled “Beamformer Lattice for Phased Array Antennas” has 22 other INPADOC family members all related to beamforming, self-multiplexing and signal routing in a phased array antenna. This patent, in particular, discloses a plurality of beamformer cells arranged in a first layer with each beamformer cell including a beamformer with a plurality of inputs, input vias with first and second ends, outputs, and output vias with third and fourth ends. Each input via’s first end is connected to a respective input and the second end is connected to a terminating trace segment of a multiplex feed network located in a second layer. Each output via’s third end is coupled to a respective output and the fourth end is coupled to an antenna element located in the third layer. As the beamformer is positioned in the first layer the routing distance to associated antenna elements is minimized.

It is interesting that Musk does not consider the more established aerospace companies and technology companies in the U.S. and Europe as long-term competitors to SpaceX. Boeing, for example, is a prolific patent filer with approximately 51,000 patents and publications. The likes of Amazon, Google and Facebook have also expressed interest in the technology. 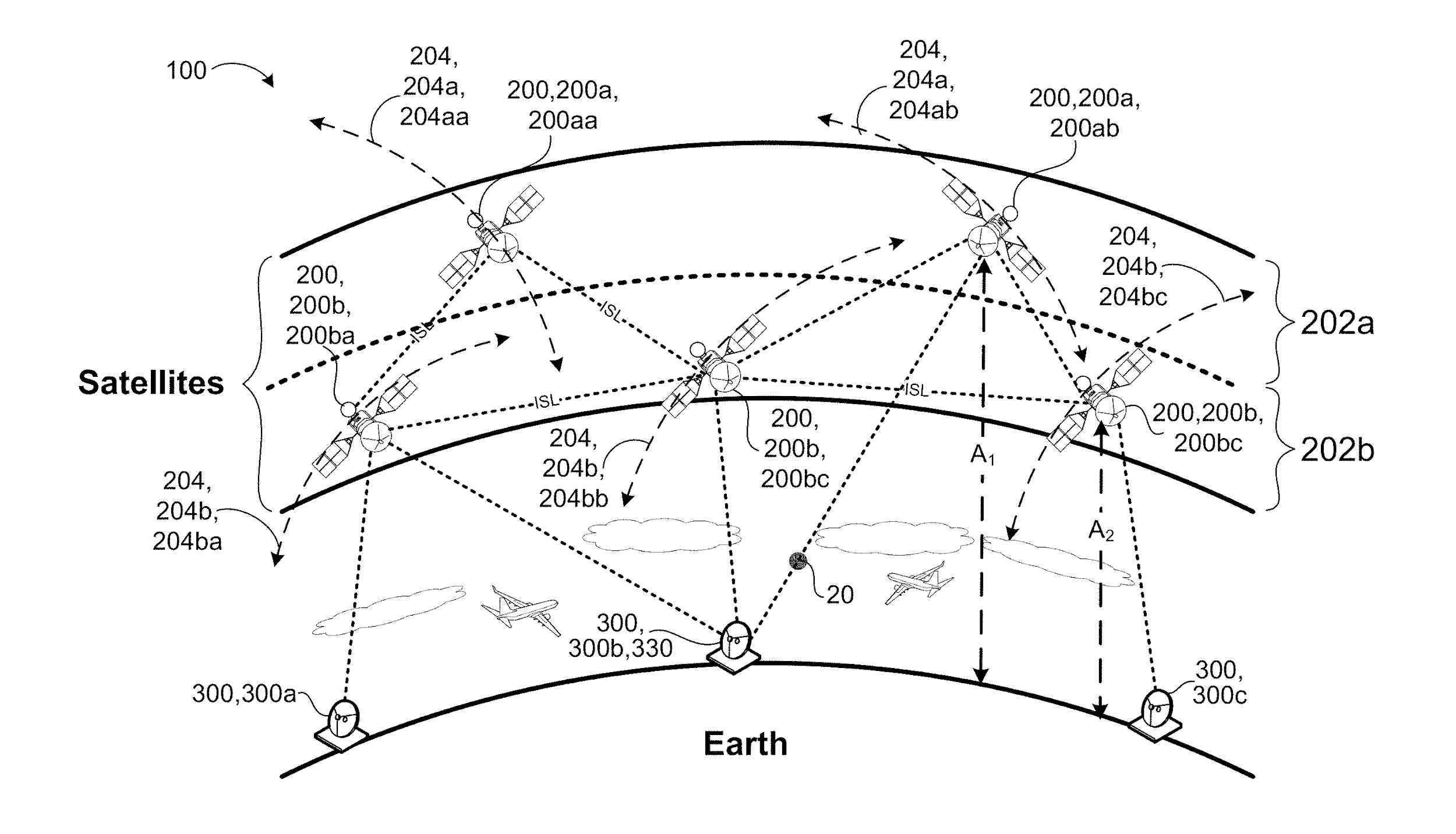 SpaceX patents are largely unrelated to its rockets and launch vehicles except for one patent focusing on a single component (Pintle injector tip) in a rocket engine and another focusing on a manufacturing method for a metal honeycomb structure with perforations. SpaceX’s patenting strategy, as revealed by their other utility patent publications, appears to be focused on novel and new implementations of antenna systems: phased array antenna design, signal routing method, beamforming and orientation. This is in line with the technical challenges related to tracking and positioning of both the satellites in the constellation and with ground units.

Contact us to learn more about MaxVal Search and Analytics solutions for R&D and patent departments. Sign up to our blog to receive our exclusive updates through email.