Fiscal conservancy has become an even higher priority because of the COVID-19 crisis. Corporate intellectual property departments have always been under pressure to demonstrate the value of patents to their business. In the face of COVID-19, they are under heightened scrutiny to act quickly and strategically to justify budgets and maximize the value of their company’s patent portfolio as part of their IP portfolio management strategy. The first part of the present series on portfolio optimization will focus on new filings and patent abandonment.

Two options for saving costs are

(1) Reducing the number of invention disclosures that are up for new filings, and

(2) Abandoning patents that are due for renewal.

The patent committee that is tasked with gathering invention disclosures, filing patent applications, and maintaining patent rights will have to weigh in multiple factors to make budgetary decisions. Patent filing related fees and maintenance fee payments contributed to 30% and 44% of USPTO’s 2019 patent revenues, respectively (Source: USPTO). One survey of patent departments suggests that expenses from new filings and patent maintenance payments can be greater than 70% of the committed patent budget (Source: IAM).

Reducing the number of invention disclosures should only be a short-term measure as it can negatively affect a company’s bottom line and weaken its competitive market position. There is a risk of losing out on priority dates for potentially disruptive technology. It can also dis-incentivise creative talent within an organization.

Maintenance fees alone can add up significantly for large and/or aging patent portfolios. As a result, many companies choose to abandon patents when the cost of maintaining a patent cannot be justified.

The top technology areas for U.S. patents that were abandoned in the last ten years are shown below. The varied technology areas suggest that early patent abandonment is practiced widely in multiple sectors. Information & Communication Technology group contributed to the predominant number of patent abandonments. Interestingly, this is where the number of patent filings is also amongst the highest in recent times.

Drilling down into specific technology areas, the abandonment: grant percentage in the last 10 year period was highest for G11B related to information storage suggesting the entities operating in the particular technology category may be facing difficulties. On closer inspection, the abandoned patents were primarily assigned to data storage providers who have faced challenges in recent years and may see further decline due to the ongoing pandemic (Source: IDC). The other category with high abandonment: grant percentage is Y10S relating to varied industrial technologies. International Business Machines (IBM) was amongst the top assignees for abandoned patents under both technology categories. 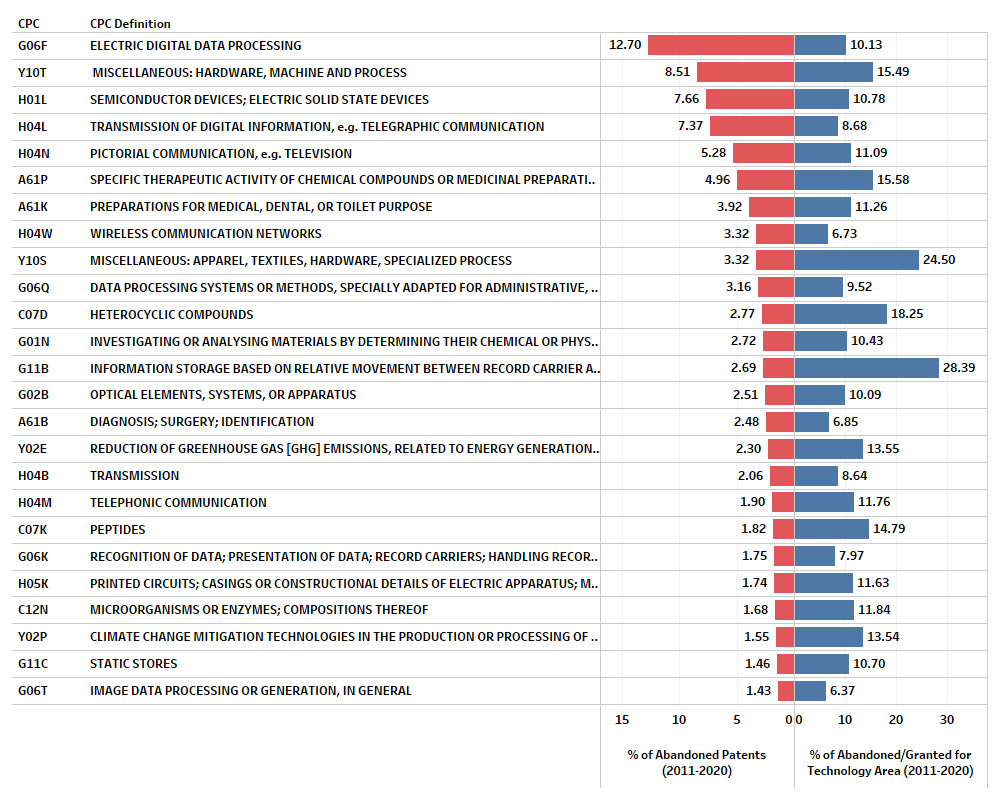 IBM is amongst the biggest patent filers in the world and has maintained its leading position in the U.S. for the last 27 years. In 2019 alone, it received a record 9,262 U.S. patents listing 8,500 IBM inventors, spanning 45 different U.S. states and 54 countries (Source: IBM). The company uses patents and other intellectual property it creates to develop, differentiate, and grow new products and services successfully. IBM’s recent patents cover a wide range of technologies, such as artificial intelligence, blockchain, cloud computing, security, and quantum computing.

IBM files for more than 8,000 U.S. patent applications each year. IBM’s patent filings dipped between 2009-2011, which coincides with the 2008 global financial crisis. Many other companies also experienced a similar trend resulting in an overall decrease in patent filings before the USPTO. If the economic impact of the coronavirus crisis continues into next year, we can expect to see a similar dip in patent filings. Expert prior art searches can help reduce prosecution costs and improve grant rates for companies, like IBM, to help them meet their targets. 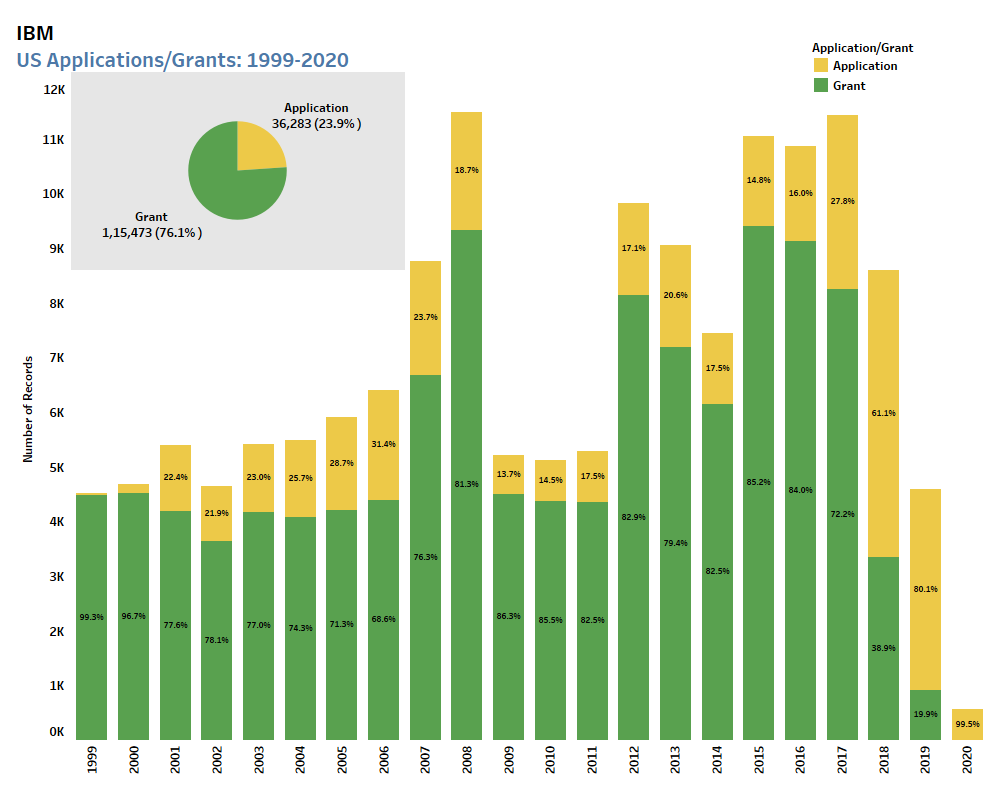 Why is IBM abandoning patents at such a high rate? As we alluded to earlier, maintenance fees alone can run into several million dollars each year for large patent portfolios. IBM abandons 60% of its patents prior to when the first maintenance fee payment is due (T0), resulting in a cost-savings to the tune of $50 million dollars. Our results align with a 2012 study suggesting that intentional abandonment has been part of IBM’s strategy for some time now (Source: patentlyo.com). IBM’s seasoned patent department quickly weeds out patents that do not align with its business objectives and those lacking in monetization potential. 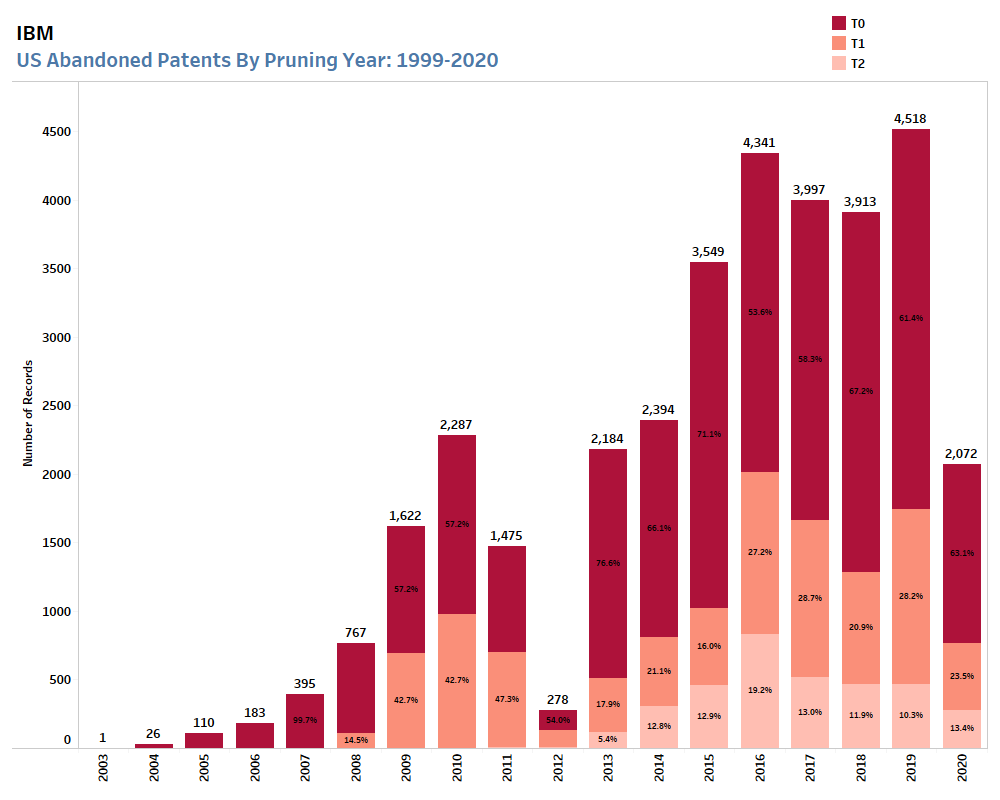 But why file these patents in the first place? IBM’s decision to file these patents only to abandon them may relate to its culture of encouraging inventors, the relative market unpredictability of the technology areas covered in disclosures, and challenges associated with developing monetization strategies for these patents. This strategy appears to be working for IBM who are also pioneers in patent licensing and transactions bringing in billions of dollars in revenue. IBM’s abandoned patents may be largely vanity patents. However, the abandoned patents may also include hidden gems. Advanced portfolio analysis can help IP departments make adjustments to its filings, prosecution, acquisitions, and renewal decisions while revealing new monetization opportunities.

In summary, although entities can cut costs quickly by cutting back on the filings and renewal payments, there is no easy way of determining which disclosures can be dropped and/or which patents can go abandoned in the absence of a framework. Multiple factors, such as business objectives, technology lifecycles, portfolio age, financial metrics, and market trends have to be considered in making these adjustments. The present COVID situation offers patent departments the perfect opportunity to develop a framework or optimize their existing framework to identify areas that are not delivering value.