Nobel Prize for Women Scientists for CRISPR-Cas9: Who Holds the Patent Rights?

For the first time, the Nobel prize in Chemistry has been awarded to two talented women scientists, Emmanuelle Charpentier and Jennifer Doudna. The win represents a big endorsement for Charpentier and Doudna from the scientific community. The duo worked together in developing the genome-editing platform termed CRISPR-Cas9. Charpentier and Doudna are only the sixth and seventh women to receive the Nobel prize in Chemistry following the first award to Marie Curie in 1911. The award is a recognition of the rapid progress that has been made in CRISPR-Cas9 and the potential that it has to transform medicine, agriculture, and possibly even human evolution. It also recognizes the contributions of two women researchers that will inspire many more women inventors in the future.

CRISPR/Cas systems are a widespread class of immunity systems that protect bacteria and archaea against phages and plasmids. They commonly use repeat/spacer-derived short crRNAs to silence foreign nucleic acids in a sequence-specific manner. Charpentier’s initial publication, in 2011, identified tracrRNA, a trans-encoded small RNA with 24-nucleotide complementarity to the repeat regions of crRNA precursor transcripts on Streptococcus pyogenes. Her team showed that tracrRNA, the host endoribonuclease III, and the CRISPR-associated Csn1 protein are responsible for the production of the active crRNAs and is part of bacteria’s ancient immune system. Subsequently, Charpentier and Doudna collaborated in 2012 to demonstrate that the Cas9 endonuclease family can be programmed, thereby raising the exciting possibility of developing a simple and versatile RNA-directed system to generate dsDNA breaks for genome targeting and editing.

The Nobel prize in Chemistry is a validation of their contributions to the CRISPR field by the Nobel committee. The esteemed scientists also recognized the commercial potential of their invention and filed patent applications on their CRISPR-Cas9 method as early as May 12, 2012 through their Universities. Unfortunately, a battle soon erupted over the commercial rights for the CRISPR-Cas9 gene-editing technologies. Shortly after Charpentier and Doudna’ patent filings, another key contributor to CRISPR-Cas9, Feng Zhang’s at the Broad Institute, who was conspicuously ignored by the Nobel committee, filed for patents that demonstrated CRISPR-Cas9 method in eukaryotic cells. Let’s take a look at some of these patents below.

US Patent No. 10,266,850 assigned to the University of California and University of Vienna features Drs. Jennifer Doudna and Emmanuelle Charpentier amongst the inventors. It is the earliest and one of the most important U.S. patents in the family that includes 153 other worldwide filings. The patent filed one day before AIA came into effect claims priority to provisional applications filed May 25, 2012 and Oct. 19, 2012. The disclosure relates to methods for modulating transcription of a target nucleic acid in a target cell by enzymatically inactive Cas9 polypeptide and a DNA-targeting RNA. 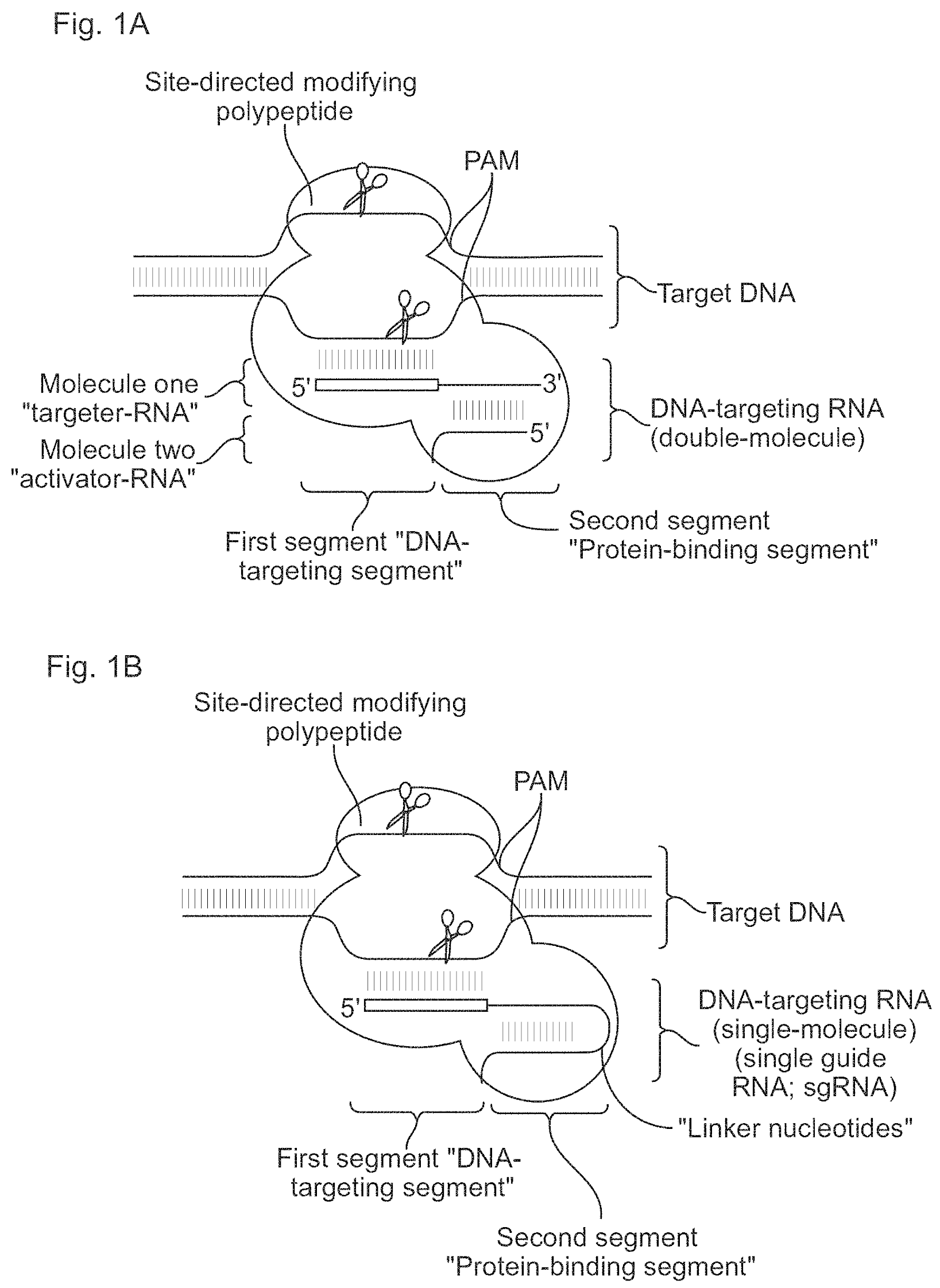 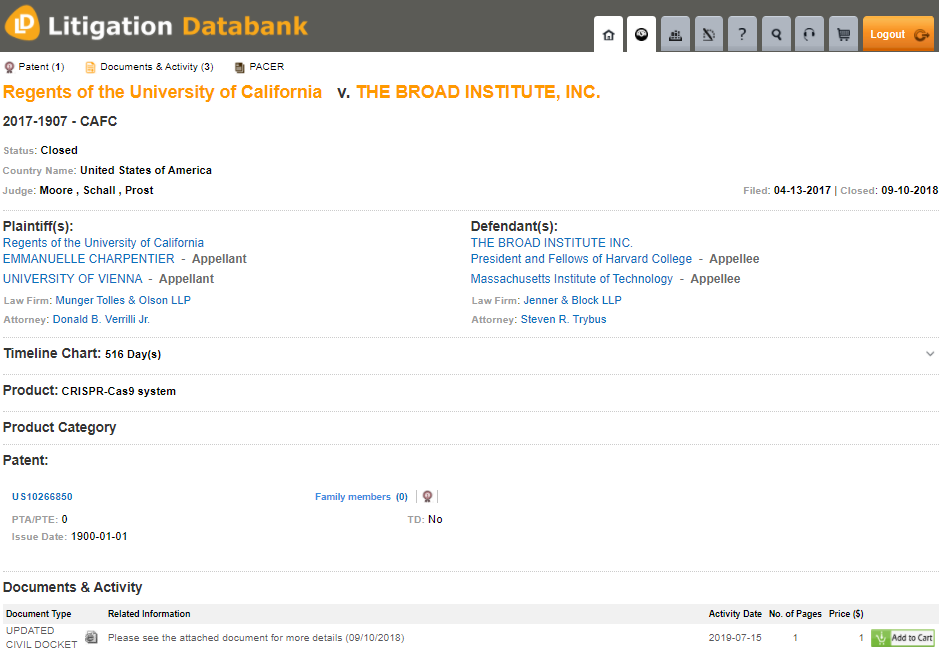 US Patent No. 10,266,850 was at the forefront of earlier litigation. Source: MaxVal’s Litigation Databank

U.S. Patent No. 8,697,359 assigned to the Massachusetts Institute of Technology and the Broad Institute lists Feng Zhang as the Inventor. U.S. Patent No. 8,993,233 assigned to Harvard, MIT, and the Broad Institute also lists Feng Zhang amongst other inventors. The patents belong to a family of 286 worldwide filings which claim an earliest priority date of December 12, 2012. The disclosures relate to methods of altering the expression of at least one gene product in eukaryotic cells by an engineered CRISPR-Cas system of a first regulatory element linked to at least one nucleotide sequence encoding a guide RNA that hybridizes with the target sequence, and a second regulatory element linked to a nucleotide sequence encoding a Type-II Cas9 protein. 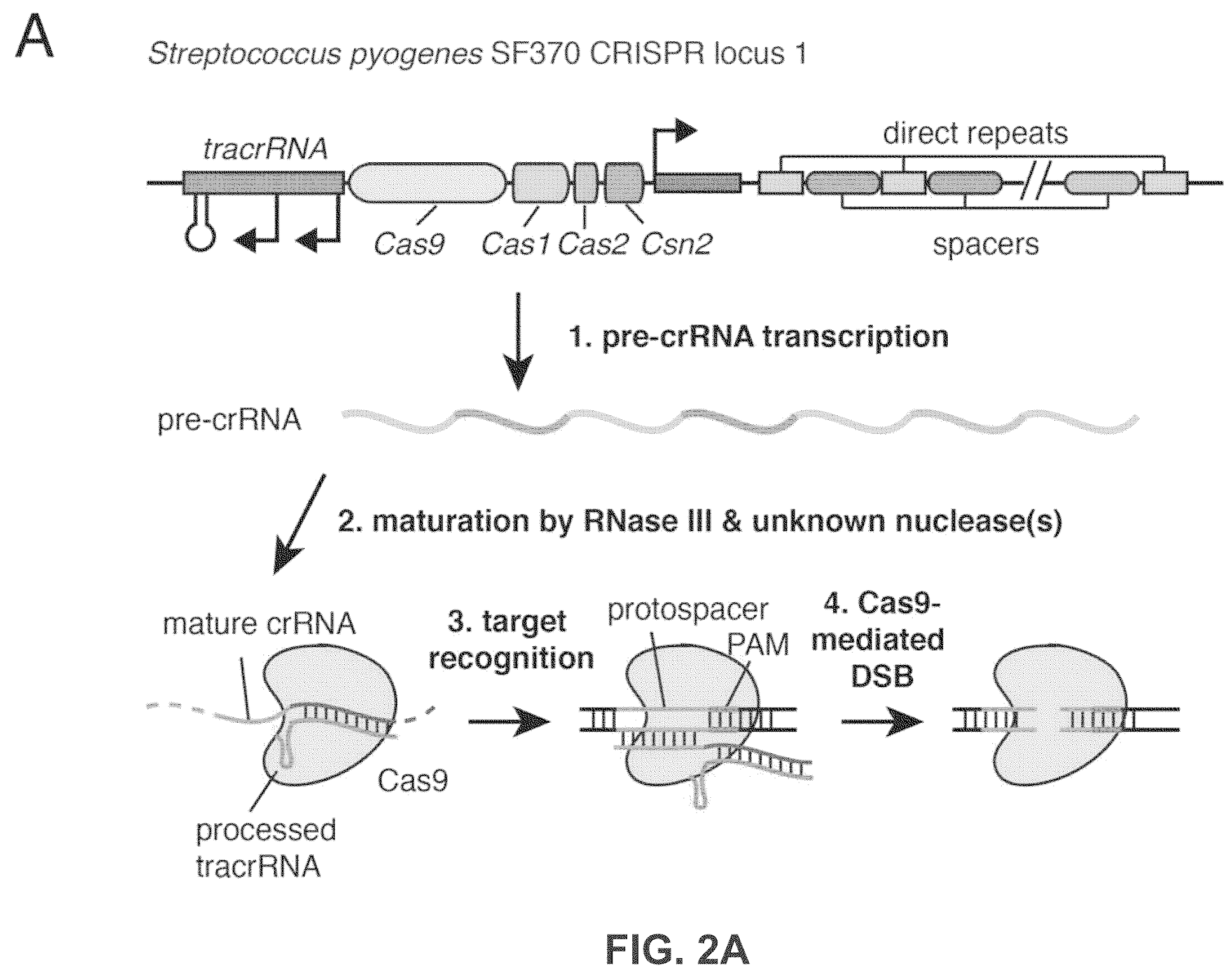 MaxVal previously published a patent landscape report in 2018 that covered the CRISPR litigation between the Broad Institute and the University of California/University of Vienna. The basis of the litigation relates to which entity holds the earliest patent rights to the use of CRISPR in eukaryotic cells (plants and animals).

The initial outcome of that patent litigation appeared to be a win for the Broad Institute. The specific disclosure on eukaryotic application from Feng Zhang’s group was held to be patentable in the U.S. in spite of the earlier general disclosure from the Nobel laureates. However, that patent battle is far from over. It has merely shifted to PTAB. The outcome of the recent interference proceedings before PTAB has the potential to shake up major investments based on Feng Zhang’s patents if Doudna can provide additional evidence substantiating that they were indeed the first to demonstrate the eukaryotic application of the technology. Had the Nobel laureates filed for patent rights after Feng Zhang’s group, they would have found themselves in an awkward situation where they did not have commercial rights to the very technology for which they were granted the Nobel prize. Their early filing emphasizes the importance of diligence when securing patent rights. 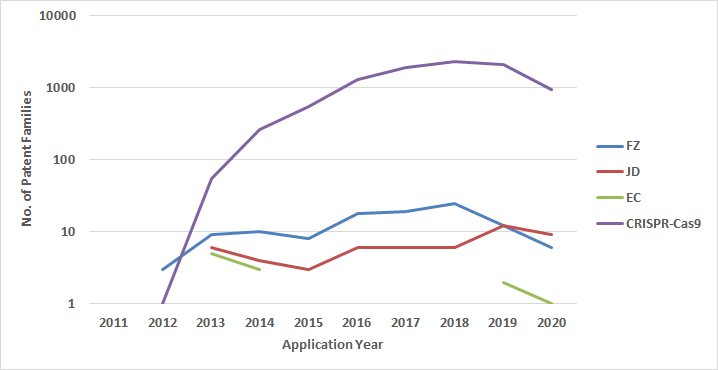 A broader patent search revealed an exponential growth in the number of inventions describing CRISPR-Cas9, which is indicative of the importance of the technology in general and the ownership of the commercial rights to CRISPR-Cas9 foundational patents. There is little doubt that the ownership of the CRISPR-Cas9 platform technology rights will be lucrative. The market size for CRISPR was valued at $685 million in 2019 and is estimated to grow at a CAGR of 25% in the next decade. While the technology is yet to prove itself in a clinical setting, it is already being applied in diagnostics, genotyping, and biotechnological advancements. One such example is the FDA-approved rapid COVID-19 detection test developed by Sherlock Biosciences. Similar tests using CRISPR-Cas9 variants are being developed to detect nucleic acids.

Due to the ongoing litigation and the presence of diverse players, the licensing landscape for CRISPR technologies remains complex and involves multiple universities, startups, and established companies across the globe. A cross-licensing agreement between the two major groups may be required for the commercialization of products from either group due to the interlinked nature of the patented inventions. A patent pool licensing model for CRISPR has also been proposed by MPEG LA.